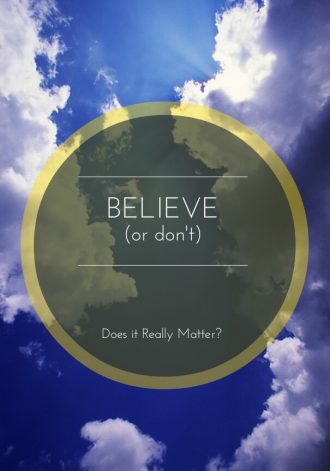 Get ready, this blog veers away from my usual writing tips and memoir ghostwriter dicussions to talk about something that’s, shall we say, “out there.” As a rule, I don’t believe in things. You know what I mean, things you can’t touch and see. I was raised by atheists. Most people I know, who were raised religiously, find it hard not to believe in something (whether that thing be a Christian God, past lives, astrology, or the Great Pumpkin). By the same token, I find it difficult to believe in anything. You can show me evidence of miraculous phenomena but I just can’t stir any deep feeling of belief in supernatural powers of any kind. I think it would be cool if such things existed, but I’d be lying if I said I believed in them. What I tend to settle on is hoping that if supernatural powers or God or angels or things-that-are-meant-to-be do exist, I sure hope they can do their thing without me believing in them, because otherwise, we’re going to be S.O.L. And really, whatever, if anything, is out there controlling the universe, it better be able to function independently, otherwise, by my estimation, it’s not a very powerful whatever-it-is. By the same token, I find religions that insist upon their followers fervently believing quite absurd. One can’t will oneself to believe. You either do or you don’t. It’s a naturally occuring thing. This makes Santa Fe a very weird place for me to live because everybody but everybody in Santa Fe believes in something.

This makes it so weird when ultra-ultra “coincidences” happen to me, which is what happened yesterday. It was the kind of thing where I think, If I believed in stuff, this would really reinforce my belief in whatever it was. Here’s what happened: I’ve been trying to figure out how to run these google ads all by myself, since every company I’ve ever hired to do it basically robbed me blind. The previous day I came to the full realization that I was spending massive amounts of money for no results, but didn’t know how to fix the problem. I felt if I stopped spending the money, I’d still be guaranteed no results, and I had been trolling the internet for tutorials on how to fix my problem, all to no avial. I knew I was doing something wrong, but didn’t know what, and I didn’t know who to ask for answers. I went to bed with this on my mind and woke up in the morning to a phone call. It was one of those companies that handles peoples’ google ads for them and robs them blind. I told the woman no thanks. She said, “That’s fine, but we offer a free consultation.” I said yes, I would love a free consultation. She did a screen share with me and showed me EXACTLY what i was doing wrong and how to fix it. I told her I could fix the problem myself, and she said, “good for you!” End of phone call. Some people would say, “You asked the universe for what you wanted and the universe responded,” or some variation of that. Me, personally, I just shake my head and say, “THAT WAS WEIRD.” Honestly, it was a little too weird to be a coincidence. Just a little too weird.

I have this acquaintance that I bump into about once every six months or so. I’ve known her for years, but not well. I bumped into her a few months ago and I’ll never forget what she said. I told her that my current ghostwriting job would wrap up toward the end of this year and I wasn’t sure what the next project would be. She said, “You manifest things.” I looked at her funny. I thought maybe she forgot who she was talking to. “No,” she said. “You do. You talk about what type of job you want next, and then it always happens for you.” “It does?” I asked, incredulous. Here, I thought I just flew by the seat of my pants, year after year. “Yes,” she said confidently. “I’ve noticed it time and time again. You manifest things.” You could have knocked me over with a feather. What she said is, actually, true, sort of, if you choose to look at it that way. I don’t. I can’t. Looking at it that way just makes me giggle. I just hope whatever power is out there keeps on doing its thing without minding that all I’m capable of doing on its behalf is saying, “Dude, that was WEIRD!”