I went to Boulder, Colorado for a friend’s wedding, which I was afraid was going to make me depressed–not because she’s all happily married and I’m not. (No thanks! Blech!) but because I’d be forced to make small talk with people I don’t know, which typically makes me feel like a badly programmed robot destined for the recycling heap. I stayed at Chautauqua Park Inn.

The other depression-causing element of such a trip is that I’d be staying by myself in a faraway place. In my youth, I used to think that was exciting and adventurous, but I now I just find it boring. Basically, I’m so old I’ve already discovered all the cool shit in life and now wherever I go, I just see different iterations of it and go, “Yeah, that would be interesting if it wasn’t so freaking obvious.”

The Zen of Chautauqua Park Inn 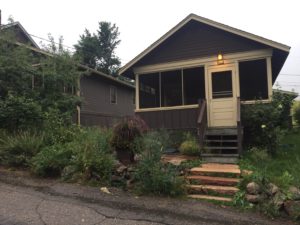 For the weekend, I stayed at Chautauqua Park Inn, specifically because I was obsessed with Zen and the Art of Motorcycle Maintenance in my youth. In the book, Robert Pirsig was always going off on philosophical rambles he called Chautauquas. I didn’t know why he called them that. I just went along with it, but words that make no sense and are hard to spell stick in my mind like thorns, sometimes for decades, without me even realizing it. Chautauqua was one of those. (Here’s a blog about being obsessed with words)

So, more than two decades after having dog-eared half the pages of that book and written my deep adolescent thoughts in the margins (Just seeing the book on my shelf now embarrasses me), I wanted to stay at this place and answer the question, What the hell is a Chautauqua, anyway? once and for all.

The Inn is actually a collection of cabins, a small apartment building, an administration building, a restaurant, a ranger station, an auditorium, and a general store all built around a beautiful, green, parklike setting, at the foothills of Chautauqua Park. (This is one of Boulder’s most beautiful public parks, with hiking and skiing trails going up into some gorgeous misty mountains.) 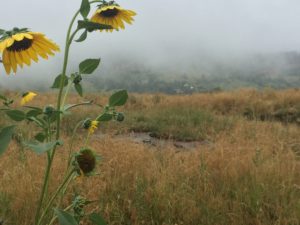 When I first got there, I couldn’t really figure it out, because in amongst the identical little cabins that clearly belong to the Inn are  some privately owned cabins that clearly belong to private people. The grid of streets looks kind of like a neighborhood merged with a summer camp, where each entity is battling for dominance–which is, basically, correct. Turns out, Chautauqua Park is actually a historic summer camp, of sorts.

Once upon a time, around the nineteen-teens and twenties the Chautauqua movement was a national thing about educating teachers. For the times, the idea that teachers (women) should get ongoing education was pretty revolutionary. So, brave lady teachers would go to these special summer camps–corsets, long dresses, bustles, parasols, broad-brimmed hats, and all–to get this mysterious thing called an education, so they’d actually have something new to teach their students each year. (Scandalous!)

Back in the day, there were a lot of these camps, but now, Boulder’s Chautauqua Park Inn is one of the few carefully preserved Chautauquas in the country. It was a wonderful, peaceful place to stay, and would have made a great writer’s retreat. (Here’s a link to my blog about the “joys” of being a writer)They have concerts in the auditorium, beautiful lawns to sit on and contemplate life, and well-tended trails up into the mountains. The restaurant is one of these farm-to-table gourmet deals, with patio seating that makes it ideal for summer. (Not a paid endorsement. I just really liked it. )

A Great Place for a Reunion

So, as a hedge against the inevitable depression that comes of witnessing someone else’s happiness (oh, relax) I invited a couple of friends to join me at Chautauqua for a long weekend. My point is, it worked out perfectly. Chautauqua Park is a great place for family reunions and other types of group gatherings.

Some of the cabins were chock full of other groups doing just that, partying it up within the general stillness of Chautauqua Park. In fact, these other, larger groups seemed, sometimes, to be having far more fun than us. If I’m honest, I kind of thought they were flaunting their fun in our faces, gathering on their screened-in porches to laugh uproariously at private jokes just because they knew my girlfriends and I were walking by. Yeah, I’ve seen those kind of fun-havers before. They would be interesting and all, if they weren’t so freaking obvious.